Although our daughter, Verti, came into this world a fortnight late, her first Christmas present arrived two weeks early. As parents, we do not intend to shower her with colourful plastic toys, especially a certain anatomically impossible doll that drives a pink Corvette. (At least she used to in the 80’s, the last time I checked.) So far, her favorite toy was homemade from driftwood – her eco-thrifty play gym – 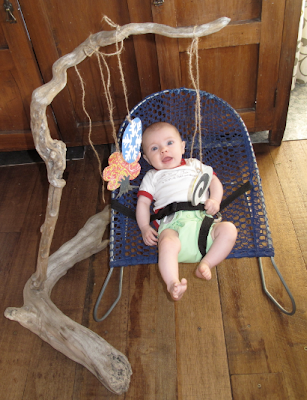 and we hope that her vehicle of choice is more of the green, two-wheeled type. All of this is a long way ‘round to her Xmas pressie: a bike trailer. 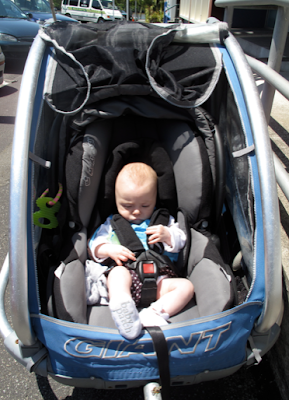 It is also a way to present another case study on eco-thrifty thinking. Everyone loves a good Christmas story, so here is:

Once upon a time in the magical kingdom of Whanganui, there lived a bald little girl called Verti Feliz. She was born on a cold winters’ night in an ancient hovel in the shire of Castlecliff. Ok, enough of that…

I’ll use this case study to remind regular readers and introduce new readers to the characteristics of eco-thrifty thinking (ETT). Eco-thrifty is not eco-chic (think Good Magazine), nor is it cheapo-thrifty (think Dollar Store). ETT seeks a middle ground between being kind to the Earth (Middle Earth?!?) and keepin’ it real regarding affordability. The central mandate of ETT is low-investment and high-performance. This mandate can be quantified using a concept known as ‘payback period.’

Back in April of this year, I introduced payback period in my first column. Put simply, payback period is the time it takes to recoup an investment in energy efficiency in actual savings. For example, the payback period for a compact fluorescent light bulb is 6 months to a year depending on usage. That means that within that time period (6 to 12 months) you’ll save the initial $5 investment, and during every subsequent interval of that time period you’ll have an extra $5 in your pocket. 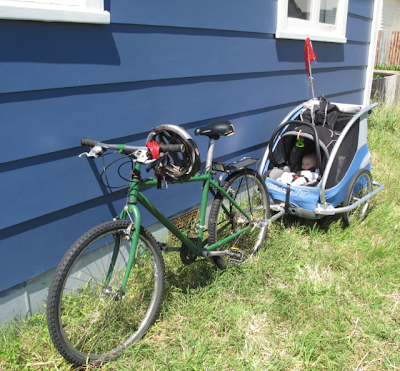 Verti’s bike trailer represents an investment in energy efficiency in that it allows us to pedal her around town instead of driving her. The IRD mileage rate for self-employed people and reimbursing employees for 2012 is 77 cents per kilometre. What this is meant to represent is the total cost of driving: petrol, insurance, WOF, repairs, etc. For us, that means a round-trip to centre city sets us back about $11. So, people, get your calculators out.

If the purchase of a second-hand baby trailer is $125, and it costs an additional $60 for a local craftsman to rebuild the wheels, then how many round trips from Castlecliff to city centre – at a savings of $11 each – would it take to recoup the investment? (Send your answers to theecoschool@gmail.com before 31-12-12. A randomly selected entry will receive a free home energy audit.)

Beyond the financial savings associated with pedaling bubs about town, Verti’s first Xmas pressie also satisfies other characteristics of ETT: reduce, reuse, and support local businesses. We bought the trailer on TradeMe from a Wanganui family that originally bought it from a local bike shop. They benefited from the sale by earning some cash from something they no longer use, and we benefited from a low-cost / high-quality investment. The trailer is a quality brand – Giant – and is built primarily from aluminium and rigid plastic, which suits our coastal position in terms of rust-avoidance. However, a number of the spokes were broken, so I dropped off the wheels at Green Bikes... 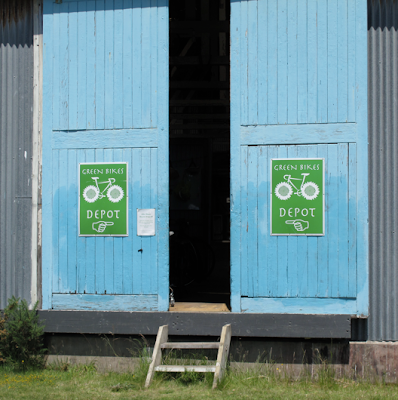 where Jonah the Whizzard of Whanganui turns trashed bicycles into two-wheeled treasures. In an especially amazing wheet of Whizzardry, Jonah had them finished and delivered before sunset on the same day. 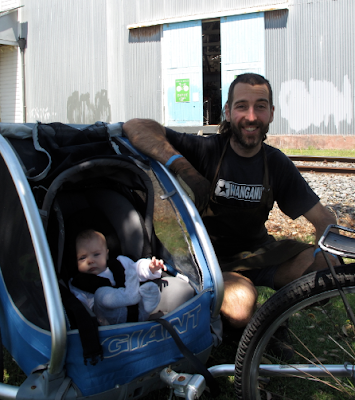 This meant the following day Verti could go for her first bike ride with me on the green bike that Jonah built for us over four years ago. Thanks Uncle Jonah! Chur.

Peace, Estwing
Posted by The Eco School at 7:13 PM