The south winds are blowing now, and even the insects have come in from the cold. 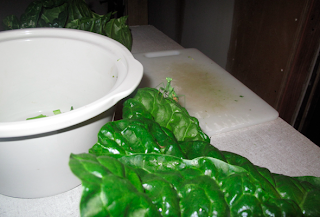 Praying for warmth.
When we bought the cheapest house in Wanganui, we knew we were getting a lot of space (110 square meters) for the money (less than a Ford F-150), but that NZ villas are notoriously cold and drafty. 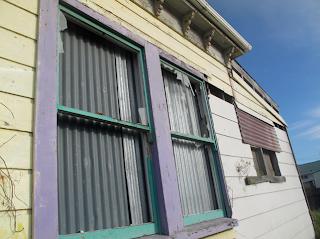 Yes, this was our house in October.
A large house with high ceilings is a great asset for half of the year, but now that the equinox is behind us and we're closing in on the winter solstice, the amount of indoor space becomes a liability. So what I've been doing this week is cutting our losses. Heat loss, that is. 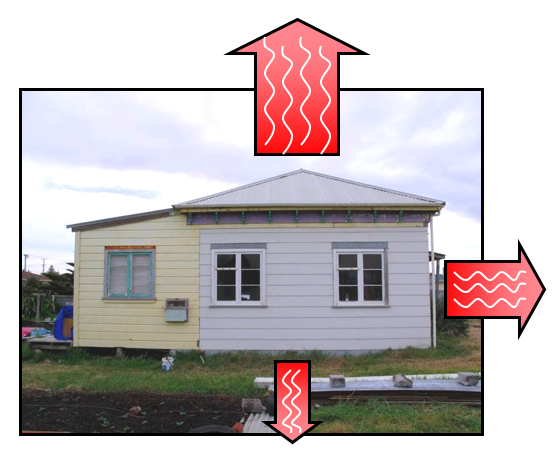 Yes, this was also our house in October.
While I've written about insulation and draft-proofing in previous posts, I have not yet addressed one of the simplest and most elegant forms of energy conservation in a home: shrinking it. I learned and lived this in Ladakh during the winter of 2006. Traditional building in Ladakh was relatively cheap because houses were made mostly of earth and straw. Labor was cheap because your family and neighbors built the house with you.

But because of the cold climate, the entire house was used for less than half of the year. Fuel (dung or wood) is scarce in Ladakh, so during the winters the entire family lived in one room: the kitchen. Cooking also heated the living space while the rest of the house literally froze. Both eco and thrifty. Right on! While we won't be restricting ourselves to the kitchen just yet, we have cut the size of our interior living space by 40 percent for the winter. Here's how: 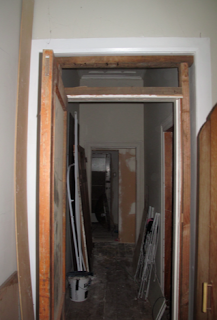 Step 1: Frame a doorway in the central hall. 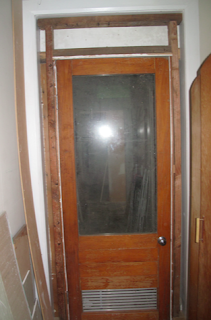 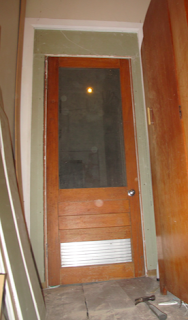 Step 3: Use leftover GIB around frame.
All that remains for step 4 is to paint and put up the trim. Step 5: curtains.

Note that we have cut off the south (poleward) side while we have increased solar gain on the north (toward the equator) side. The two large bedrooms on the south side where our interns John and Amy stayed over the summer are now secure storage for surf boards, bicycles and tools. These rooms will buffer our living space from the cold southern winds and provide dead air space (insulation). Also, they're a great space to store our great pumpkin harvest. 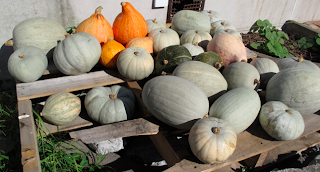 Peace and perspective, Estwing
Posted by The Eco School at 3:31 PM