Reviving Old Windows...following an observation about our Council

Before I get started this week, I am wondering: Are the environment and sustainability dirty words in Whanganui?

Exercising my duty as a member of a democracy, I carefully read the Candidate Information booklet I received in the post. Among the candidates for mayor and councillor, there was nary a mention of any type of commitment to sustainability, save for one candidate’s mention of “a reduce, reuse, recycle and reinvigourate mantra.” I like it, Mr. Keating, but what about the others?

Additionally, every mention I have seen of the new Resource Recovery Centre has emphasized the point that it was built at no expense to ratepayers. I may be different, but I consider waste minimization and recycling one of the highest and best uses of my rates – much preferable to some of the ill-conceived ways my rates have been spent. Is there such fear of eco-backlash in our community that it forces Council to go to lengths to distance itself from any apparent commitment to strong sustainability? Personally, I have received nothing but positive feedback on my column from a wide cross-section of our community. Additionally, good data exists indicating that Whanganui could save itself millions per year in energy savings while creating jobs. So, I’m left to ask: What gives?

Last week I asked readers to share their original ideas and/or success stories of implementing ideas from this column or from Project HEAT (Home Energy Awareness Training) for making homes warmer, dryer and healthier. If you have been meaning to do so but have not done so, please do so!

I appreciate readers’ patience over the last three weeks, as this column has been more about eco-design thinking than the nuts and bolts of DIY. I try to strike a balance between the two. This week we are back to the practical, hands-on nature of eco-thrifty home renovation. 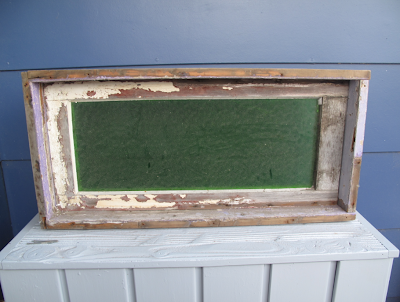 The day we bought the villa in 2010, there were few windows unbroken. Of those, we found an interesting scalloped green glass window in its original frame sitting in what was the kitchen. From all appearances, the villa was in the midst of multiple initiated and abandoned reno projects. Apparently, someone had removed this window from the wall where it had been and placed it in the kitchen – for safe keeping?

We thought the window was original to the villa because it had the distinctive purple and yellow colour scheme found throughout. (Eat your heart out, Terry Lobb!) As such, we wanted to integrate the window into our renovation, but where? Truth be told, my wife was against the idea, so I waited until she went to the states for a wedding and did the project in her absence. 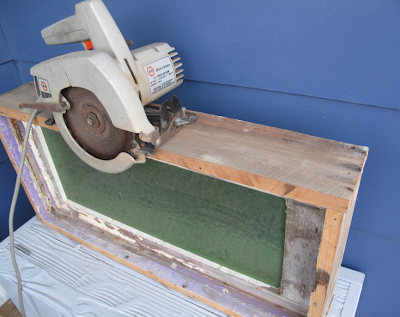 When dealing with second-hand building materials, it is best to take caution when dealing to paint (potentially lead-based) and when cutting wood that may harbor hidden nails. In this case, I used a second XV saw blade and kept a vacuum at the ready for Hoovering up paint chips. Oh, and eye, ear, nose protection. 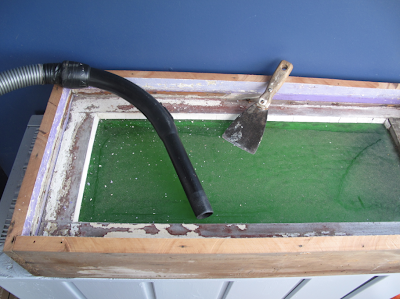 The window frame would have originally fit into a wall framed with 100 mm studs but the wall into which I was inserting it had been rebuilt by a mysterious previous owner using 90 mm studs. Using my back-up saw and a grunty blade, I ripped 10 mm off the frame – finding a few nails in the process. 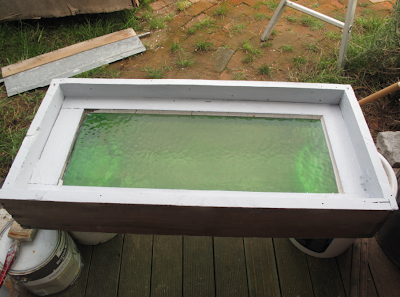 Next, I scraped and sanded the loose and flaking paint, and vacuumed up the dust immediately. While the frame was on the ground, I primed it thoroughly before adding two coats of paint. Finally, I set the window in place, trimmed it out, and flashed it. And guess what…the wife liked it. 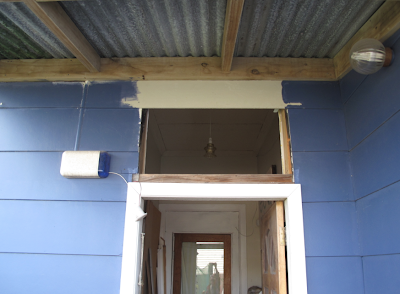 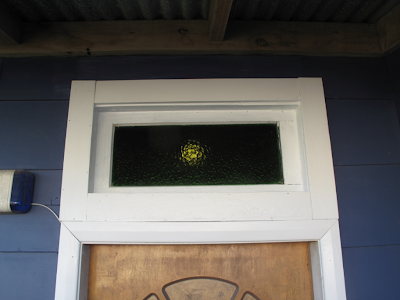 Peace, Estwing
Posted by The Eco School at 7:14 PM